The United States of Crazy Laws! 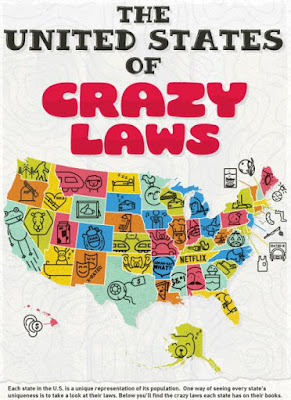 Below are some of the more questionable, comical or just plain dumb laws that exist in each of the fifty states.

You can’t wear a fake mustache that causes laughter in church.

Don’t even think about it, kid.

If you see a sleeping bear, it’s illegal to wake it up for a photo op.

This man has no respect for the law.

Not to be confused with “KANzis”.

It’s unlawful to allow a dog to pursue a bear or a bobcat at any time.

But in Homeward Bound, the dogs just run away from them.

Tags may be ripped off of pillows and mattresses.

Which means everyone is a criminal outside of Colorado.

A pickle is not a pickle until it bounces.

Yes. We made a GIF for this.

You are forbidden to sell the hair of a dog.

The real reason the Newton family had so many St. Bernards.

They accidentally banned every computer in the state by poorly wording a law which outlawed Internet Cafés.

If you’re in Florida reading this, please turn yourself into the local police.

You can’t keep an ice cream cone in your back pocket on Sundays.

You cannot use imitation milk in a milkshake without warning the drinker.

But Spam can go in anything, anywhere, all the time.

Giving your sweetheart a box of chocolates weighing more that 50 pounds is illegal.

But unlimited McDonald’s is totally cool.

You can drink under 21, if you’re enrolled in a culinary program.

The value of Pi is 3.
Maybe Hoosiers should stick to basketball.

Same goes for people (or, um, space critters) without noses.

If two trains meet on the same track, neither shall proceed until the other has passed.
You CAN pass, just wait a moment.

Let’s just call this, “The drunk uncle at Easter law”

It’s a $500 fine for sending a pizza man to a friend’s house without them knowing.
Pizza is not a joke.

It is illegal for Christmas decorations to still be up after January 14th.

Honestly, this should be a national law.

A vending machine may NOT dispense a non-latex condom.

It’s how you use it.

You cannot own an explosive golf ball.
But they only explode if you hit them.

A woman isn’t allowed to cut her own hair without her husband’s permission.
DO YOU WANT TO GO TO JAIL?

Using goldfish as bait is against the law.

Body parts are still up for debate.

High school teachers may not have sex with their students.

It is illegal, but mostly: gross.

One cannot drive with an uncaged bear.

One is also insane if they’re driving with a bear, caged or uncaged.

Seven or more Indians are considered a raiding or war party… and you can shoot them.

This law has another word – “racism.”

Shark fishing is totally cool, though.

A man can’t buy drinks for more than three people at a time.

Putting roofies in them is frowned upon, also.

It’s illegal to show a movie before 2 pm.

Seeing Frozen alone at 1 p.m. is no longer an option.

If you’ve been arrested for drunk driving, you lose the privilege of personalized plates.

And that kids, is how bumpers stickers were invented.

Idiots may not vote. Nor can insane people.