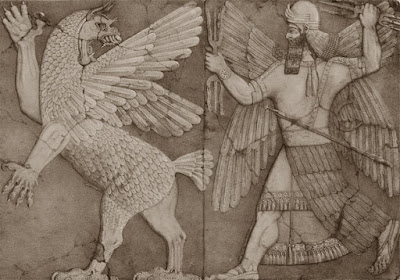 The origins of human beings according to ancient Sumerian texts

(Read the article on one page)
Sumer, or the ‘land of civilized kings’, flourished in Mesopotamia, now modern-day Iraq, around 4500 BC. Sumerians created an advanced civilization with its own system of elaborate language and writing, architecture and arts, astronomy and mathematics. Their religious system was a complex one comprised of hundreds of gods. According to the ancient texts, each Sumerian city was guarded by its own god; and while humans and gods used to live together, the humans were servants to the gods.
The Sumerian creation myth can be found on a tablet in Nippur, an ancient Mesopotamian city founded in approximately 5000 BC.
The creation of Earth ( Enuma Elish ) according to the Sumerian tablets begins like this:

When in the height heaven was not named,
And the earth beneath did not yet bear a name,
And the primeval Apsu, who begat them,
And chaos, Tiamut, the mother of them both
Their waters were mingled together,
And no field was formed, no marsh was to be seen;
When of the gods none had been called into being,
And none bore a name, and no destinies were ordained;
Then were created the gods in the midst of heaven,
Lahmu and Lahamu were called into being...

Sumerian mythology claims that, in the beginning, human-like gods ruled over Earth. When they came to the Earth, there was much work to be done and these gods toiled the soil, digging to make it habitable and mining its minerals.
The texts mention that at some point the gods mutinied against their labour.

When the gods like men
Bore the work and suffered the toll
The toil of the gods was great,
The work was heavy, the distress was much.

Anu, the god of gods, agreed that their labour was too great. His son Enki, or Ea, proposed to create man to bear the labour, and so, with the help of his half-sister Ninki, he did. A god was put to death, and his body and blood was mixed with clay. From that material the first human being was created, in likeness to the gods.

You have slaughtered a god together
With his personality
I have removed your heavy work
I have imposed your toil on man.
…
In the clay, god and man
Shall be bound,
To a unity brought together;
So that to the end of days
The Flesh and the Soul
Which in a god have ripened –
That soul in a blood-kinship be bound.

This first man was created in Eden, a Sumerian word which means ‘flat terrain’. In the Epic of Gilgamesh , Eden is mentioned as the garden of the gods and is located somewhere in Mesopotamia between the Tigris and Euphrates rivers.

Sumerian tablet depicting Enki in the creation myth. ( world-myth.com)
Initially human beings were unable to reproduce on their own, but were later modified with the help of Enki and Ninki. Thus, Adapa was created as a fully functional and independent human being. This ‘modification’ was done without the approval of Enki’s brother, Enlil, and a conflict between the gods began. Enlil became the adversary of man, and the Sumerian tablet mentions that men served gods and went through much hardship and suffering.
Adapa, with the help of Enki, ascended to Anu where he failed to answer a question about ‘the bread and water of life’. Opinions vary on the similarities between this creation story and the biblical story of Adam and Eve in Eden.
Featured image: Sumerian chaos monster and sun god. ( Wikipedia)
Note: Ancient Sumerian translations were taken from William Bramley’s book, The Gods of Eden .
Related Links
Adam and Adapa: Two Anthropological characters
Sumerian creation myth
Enuma Elish - The Epic of Creation
Sumerian Myths of Origins
Sumerian Deities
at December 28, 2016
Email ThisBlogThis!Share to TwitterShare to FacebookShare to Pinterest

Neil Keenan’s battle against the world wide conspiracy of bankers

End of 2011 the Irish-American businessman Neil Keenan (agent of the Asian Dragon family) filed a claim in the Federal court in New York. [1] Neil Keenan’s lawsuit is not just about the stolen bonds with a face value of 134,500 billion dollar. It entails the largest fraud in the financial world. The story behind the claim exposes the corruption within the banking industry. It also uncovers the involvement of world leaders with these corrupt practises and unveils the sinister agenda of the Cabal (secret ruling elite, also called Illuminati). Furthermore it reveals the true motivations behind the Second World War and 9/11.
And if the claimed amount of more than a trillion dollar is not spectacular enough, the list of defendants is at least as impressive: Dal Bosco (financial advisor of the Vatican), the Italian government, Prime Minister Berlosconi, the United Nations, Ban Ki-moon (UN), World Economic Forum and the Federal Reserve Bank in New York. [1]
One would almost think that this is not a serious case, but nothing could be further from the truth. This case is dead serious and everything indicates that this story is the absolute truth. A chilling truth, at least for the Cabal, as this most likely will be the sword of Damocles that hangs over their head.

In June 2009 two Japanese men were arrested in the Italian Chiasso, near the Swiss border. The two Japanese, Yamaguchi and Watanabe, carried in the double bottom of their suitcase Federal Reserve Bonds with a face value of 134,500 billion dollar. [2] The two were accused of having counterfeits in their possession and after the arrest their bonds were confiscated by the Italian police. After they were brought before the court, they were quickly released and there is no police or legal report anywhere to be found, neither in the Italian police record, nor at the Financial Police, nor at Interpol. However, the confiscated bonds remained in the hands of the Italians and there is proof that they have been redeemed by the Italian government and the Federal Reserve Bank in new York and placed in a financial program of the United Nations.

The history of the Dragon Bonds

In order to understand the origin of these bonds and their astronomical value, one needs to go back to the time of the silk route. For thousands of years the West is engaged in trade with the East and particularly since the era of the East Indian Trading Company this trade intensified. Merchandise like silk, ceramics, spices and other valuable goods were imported from Asia. The Asians only accepted gold as payment and this is how 85% of the worldwide gold ended up in the East. This gold belonged to the Dragon family — China’s dynastic rulers before the communists came to power — and is now spread over various Asian countries: Indonesia, Thailand, South-Korean, Japan, the Philippines, Malaysia and Taiwan. [3]
In order to regain this gold, the Cabal in the West made a secret agreement to plunder it from Asia by means of three world wars. This plan dates from 1776, the year that the Illuminati was founded as well. Later on in 1921, 18 years prior to when World War II would start, another secret agreement was signed by the American, British and French government, the future Japanese Emperor Hirohito and the Chinese communist leaders, to start the Second World War and steal the gold of the Dragon family. A copy of this agreement will be submitted in Neil Keenan’s lawsuit.

Example of Federal Reserve bond with face value of $ 100,000. Bonds with higher values, half a million to 100 million per bond, were also issued.
Part of the plan was a false flag attack by a Japanese proxy that stole part of the gold in China in the twenties. [5] This convinced the Dragon family to safely put away part of their gold in the Federal Reserve Bank in the US. The first part was shipped in 1934 and in 1938 seven tankers fully loaded with gold-bars left for the US. In exchange the Dragon family received Federal Reserve Bonds with gigantic values, varying from a million to 100 million dollar per bond. A condition of this deal was that the gold would be used to finance humanitarian projects to develop and modernize Asia and Africa.

In 1944 the International Monetary Fund (IMF) and the World Bank were founded as part of the Bretton Woods agreement. [6] This was the start of the current worldwide financial system. The US demanded that from then on the Federal Gold Reserve would form the basis of the monetary system. It was a clever ruse to make sure that a large part of the gold in the hands of the Dragon family that was not part of the Federal Reserve, would this way be non-tradable. The gold that was handed over to the Federal Reserve Bank was lent for a period of 60 years. When this term ended in 1994 for the 1934 bonds the Dragon Family demanded their gold back. Because the promises made by the West to modernize the third world by humanitarian projects were not kept and furthermore the funds were used to finance various wars.

Because the Federal Reserve Bank did not want to return the gold, the Dragon family filed a lawsuit at the International World Court in The Hague. The trial took place behind closed doors and when the Dragon family won the case the Federal Reserve Bank was obligated to return 200,000 tons of gold. The deadline when this gold had to be sent back was September 12 2001, the day after 9/11. The gold was stored in the vaults in the basement of the World Trade Centre, and has disappeared ever since the attacks. Cantor Fitzgerald Securities the shipping company that was in the possession of the insurance and transportation documents was located in WTC 1. During the 9/11 attacks all 600 employees were killed and all documents vanished. The Treasury Police was located in WTC 7 and when this building came down, their documents disappeared as well. The message to the Dragon family was loud and clear; the Fed did not have the intention to return the gold. [3]